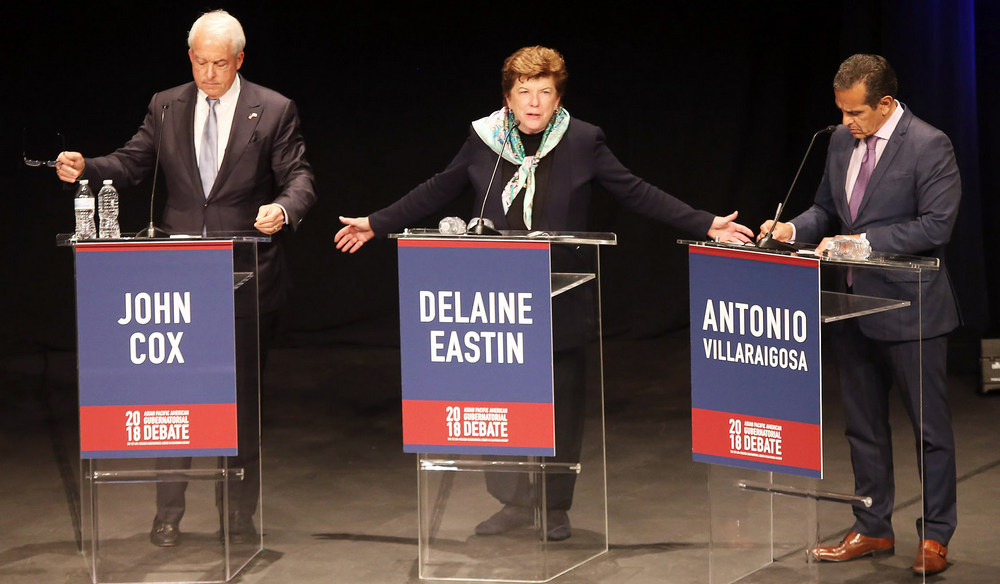 The debate was moderated by Richard Lui, of KNBC-4, and Seema Mehta, of The Los Angeles Times. Questions centered around healthcare, housing, environment, language accessibility and education. Democrat Gavin Newsom did not attend the event. His office did return calls or emails from Pasadena Now.

Asked about the hot-button immigration issue, both Cox and Allen stressed border security and crime, with Cox calling Mexico a “corrupt and out-of-control country,” while Eastin noted that half of California’s businesses have at least one immigrant as a founder. Villaraigosa pointed to a recent study by the American Academy of Science, which determined that undocumented immigrants commit less crime than native-born Americans.

On the question of Affirmative Action programs, Eastin said, “I believe in Affirmative Action for lower income students, for people who have special needs, and I believe that this state needs to make college education free for each and every California student. Let’s focus on helping every kid in this state have a brilliant future.”

Asked about climate change, Eastin countered, “I believe in something called science. I not only believe in what Governor Jerry Brown is doing, but I will take it much further. The reality is that we absolutely have to reduce our carbon footprint in this state.”

Addressing the housing and homelessness issue, Eastin declared, “We need a full court press to make sure we’re building homes close to transit hubs,”, while Villaraigosa acknowledged that the cost of housing is the reason why California has the largest number of homeless in the country, and Addressing the housing and homelessness issue outlined a wide-ranging plan which included transit-oriented districts, “granny flats,” and housing trust funds.